Hello, I know you made this game only for a game jam but can you make a sequel or something that contains more ingredients and recipes for more fun.

And keep up the good work! :D

i've only ever gotten up to a C on the burgers, but i have not given up hope

are there other recipes to be unlocked if by some magical witchcraft I achieve a passing grade of an A or B?

Unfortunately I did not have time during the jam to make more recipes, but if I were to continue developing the game that would be the idea ;)

I got all the cheeseburger ingredients on a plate and a C rank. I'm so proud of myself.  This was funny.

Hard but really funny. I didn't succeed in making burgers, but I did make quite a mess. Great idea!

That was really awesome! We played for ages! It was lots of fun. I loved how difficult the controls were. Had us laughing like crazy. Had to stop playing was laughing so hard. OMG the pans are a red herring <SPOILER> The only way to get anywhere is to abuse the knife. The cookbook was really well implemented. 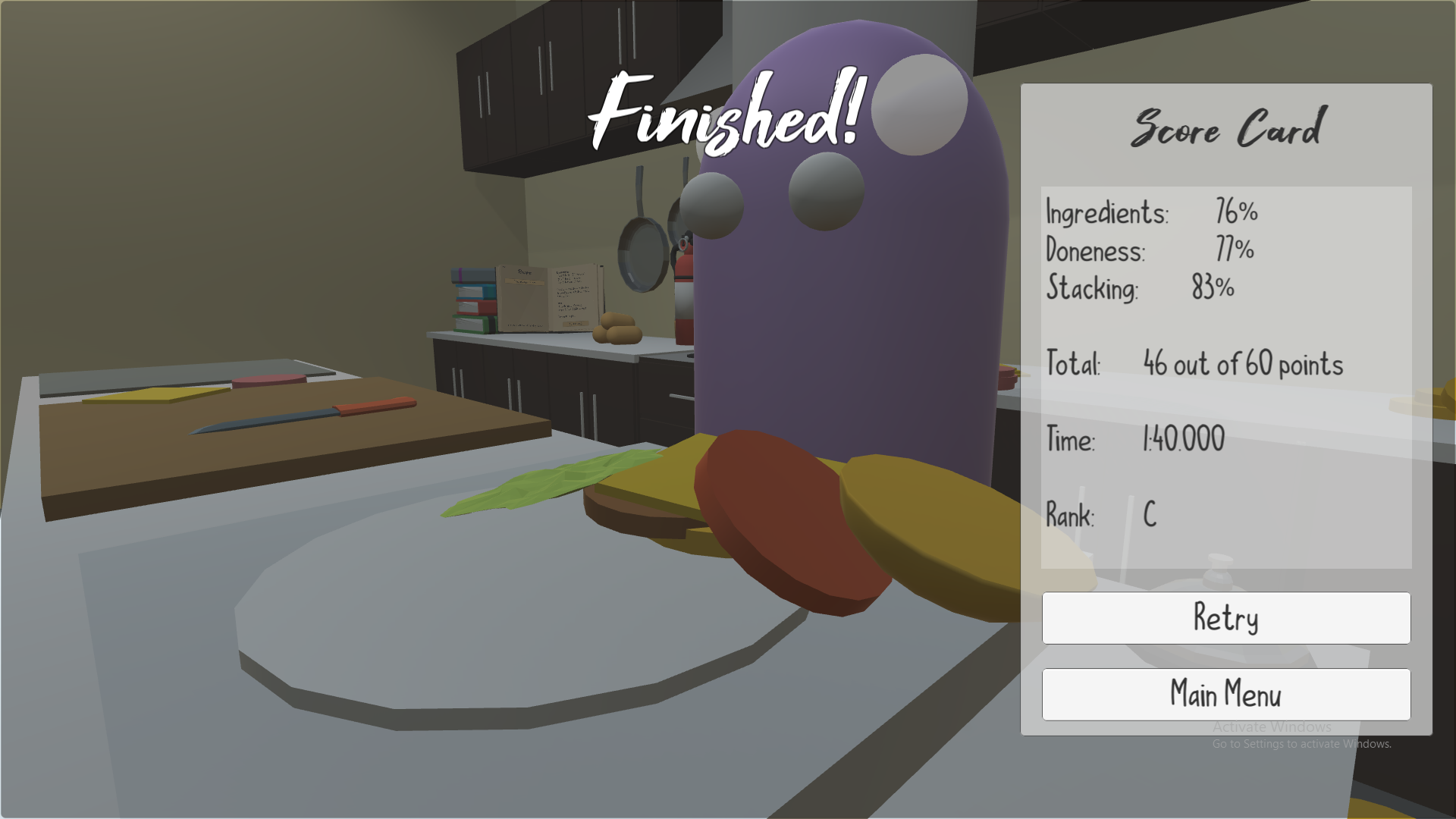 Good job on the burger! Idk if anyone else has managed to get higher than a C yet (and actually I don't think I scored higher than that either). Yes the stove and frying pans are red herrings and I just realized that may have been a bad idea... Glad you guys had fun playing!

Wow this game was fun  but it was also really hard. Really cool concept. i did a video on it!!

Haha, omg that was hilarious, thank you for making that!

It's  nice to see how someone else plays the game considering I didn't have someone play the final version. I just realized that it's REALLY misleading to have a stove and frying pans there since they actually do nothing. You need to use that gray slab on the left ;)

Reply
The GDWC351 days ago

Well that was hard hahah. I still enjoyed the game and after a few tries I even got some lettuce on there. The controls were difficult but I guess it's part of it. I ended up writing down the recipe on paper to remember what I had to do, maybe there could be an option to check the menu as you play or have it visible at all times?

Other than that, great game :D

I don't know if you've heard of Game Development World Championship before (gdwc2019) but it's a competition for indie game developers where they can submit their games and it's free! It's great if you want some more visibility for the game and it only takes a couple of minutes to join :)

Yea the person below also suggested having the recipe displayed somewhere so I'll figure something out for that.

I haven't heard of that championship but I'm definitely interested now. Thanks for the info!

Reply
The GDWC348 days ago

Your game was fun and it had a cool concept, but i think it was too hard.

I would suggest to add the recepie somewhere when you are cooking, so that you would remember it.

That's a good idea. Maybe I could change it so you can interact with the cook book again to view the recipe or add something to the HUD.

Oh man this is hard (I failed both times I tried) but pretty fun. Reminds me of stuff like job simulator, where the most fun is made by just tossing stuff around.

I got a little annoyed with the character having to grab things behind him, because then he ends up blocking whatever he's doing. I see you made him transparent when his hands are behind, but his hat is still blocking everything. Makes it hard to pick up the patty in time.

If you hit credits and then start, the credits text is still there under the start text.

Yes I think it may be a bit too difficult. I ran out of time so I did not go through a balancing phase like I wanted.

Sorry about that hat thing. I threw that on the character at the end and did not realize it would block the view. I'll try to fix that and the other bug you mentioned.